Ministry of Culture and Information Republic of Serbia 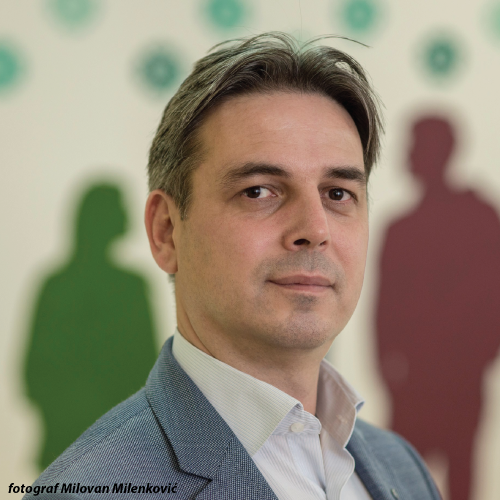 Mr Dejan Masliković was born in Belgrade, in 1971. He graduated from the Faculty of Fine Arts, at the University of Arts in Belgrade. At the same University he received a Master’s Degree in “Interculturalism, Art Management and Mediation in the Balkans” under the auspices of UNESCO and CEI in 2010, and a PhD Degree with the thesis “The Capacity of Digital Technology for Development of an Inclusive Society” in 2016.
From 2002 to 2004 he was appointed as Coordinator for International Cooperation, Development and Promotion of Culture, as well as Coordinator for State Public Administration Reform, at the Agency for Development of Culture of the Republic of Serbia. In 2004 and 2005 he was an Adviser for Public Relations and Regional Cooperation in the Cabinet of the Minister of Culture and from 2005 to 2007 as the Chief of the Cabinet of the Minister of Culture. From 2007 to 2016 he was Assistant Manager of the The Serbian Academy of Sciences and Arts.
He participated in numerous local, regional and international conferences: “Intercultural Dialogue”, Granada, 2005; Organizer and participant of the Expert Meeting for the Establishment of the Council of Ministers of Culture of the Balkans, and a member of the Working Group for the Preparation and Coordination of Signing of the Charter of the Council, Tirana, Belgrade, Copenhagen 2004-2005; Organizer and participant of the Conference “Inclusion of OSI in the work of cultural institutions”, at Ethnographic Museum, 2005; “Disability context – inclusion of persons with disabilities in cultural life”, Colchester, UK, study visit in 2005; “Forum Belgrade”, Cultural Policy in the Context of European Integration, Belgrade, in 2007; “ASSU”, International Conference “Accessibility of cultural institutions”, Athens; “Cultural heritage without barriers”, International Conference, Sarajevo, 2014 and 2016; “Globalization-Risks and Advantages”, Belgrade, 2016; Linc-international Conference – “Use of ICT in Education” and many others.
He was the author and organizer of the tactile exhibition “In Touch with the Antique”, at the National Museum, in 2005; Editor of the Manual “Culture of Equality”, with the group of authors ‒ “Disability Portfolio”, two Serbian editions, 2006 and 2008. He was the President of the Cultural Center of Belgrade and Chairman of the Commission for awarding the City of Belgrade for an event of exceptional importance for the City of Belgrade, 2014–2016; The Representative of the Ministry of Culture in the Management Board of the Foundation for solving housing problems of young scientists and art workers from the University of Belgrade, 2004–2007; Member of the Provisional Working Body of the Government for the Preparation of the Action Plan for MO “Francofonia” 2005; Member of the Working Group for Cultural Cooperation and Technical Assistance to the Ministry of Culture of the Republic of Srpska, 2005–2006. Coordinator of the Ministry of Culture in the Council of Ministers of Culture of South East Europe, 2004–2007. Member of the Inter-sectoral Working Group on European Integration 2005–2007 and the Inter-Sectoral Working Group on Digitization 2006–2007. He is a member of the Žiča Monastery Foundation “Heritage”;
He attended professional skills training course organized by The United States Institute of Peace and the Agency for the Advancement of State Administration; Seminars “Public Relations” at Governmental Office for Media Cooperation, “Improvement of business in cultural institutions”, organized by the United Nations Development Program and Enterprise Restructuring Unit at the Ministry of Finance and Economy; Seminar “Project Management”, organized by the Agency for Improvement of Public Administration and UNDP; A two-year “Training for the Public Administration Reform Coordinator”, organized by the CMPS, DFID and National Agency for the Improvement of Public Administration.
Fluent in English language.
Married and father of two children.