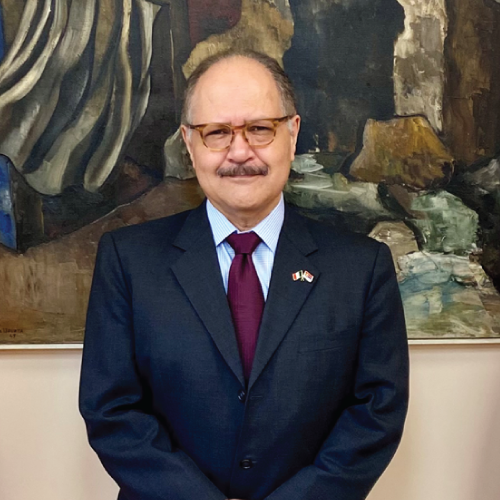 Ambassador Carlos Isauro Felix Corona is career diplomat graduated in International Relations from the National Autonomous University of Mexico, with specialized studies in Diplomatic Affairs in the Matias Romero Institute, Diplomatic Academy of the Ministry of Foreign Affairs of Mexico.
Ambassador Felix Corona joined the Foreign Service in 1982 and was promoted to the rank of Ambassador in May 2009.
He served as Consul General of Mexico in San Francisco, California USA, (Nov. 2007 to Sept.2013), with jurisdiction in Northern California and the States of Oregon, Washington, Alaska and Hawaii.
Ambassador extraordinary and plenipotentiary to Malasia, concurrent to Nauru and Kiribati. (Jan. 2014-Feb 2021).
He served as Minister for Political Affairs in the Embassy of Mexico in the United States of America (2001-2007); Deputy Consul General of Mexico in San Diego, California, USA (1995-1999); Deputy Consul General of Mexico in Los Angeles, California, USA (1994-1995); Charge d’ Affaires a.i. Embassy of Mexico in the Socialist Federal Republic of Yugoslavia (1992-1994) and Deputy Head of Mission in the Embassy of Mexico in the Republic of Korea (1987-1991).
He has been posted at the Ministry of Foreign Relations of Mexico as Director General for Assistance to Mexicans Abroad and Consular Affairs (1999-2001); Head of the Department in the Division of Treaties; Head of the Department of Law of the Sea; Head of the Department of Political Affairs and Disarmament, Division for United Nations; Head of the Department in the Division for International Borders and River issues (1982-1987).

Through his diplomatic experience Ambassador Felix Corona has developed ample expertise in the US-Mexico relations including political affairs; migration; border issues; human rights; labour issues and consular cooperation; economic promotion and cultural cooperation.
As part of his work on human rights, during his mission in Malaysia, Amb. Felix Corona accomplished to save the lives of three Mexicans sentenced to death penalty and repatriate them with their families.
Ambassador Felix Corona has received different awards; he was honoured by the Senate of California in a special ceremony held at the state Capitol, with a Senate Proclamation, for his contributions to deepen the links between Mexico and California. He received certificates of honour for his outstanding service by the cities of San Francisco, Los Angeles California and San Diego California, among others.
On June 2020, Amb. Felix Corona was appointed by the President of Mexico as ambassador extraordinary and plenipotentiary to the Republic of Serbia, concurrent to the republics of Bosnia-Herzegovina, Montenegro and North Macedonia. On July 2021 the Mexican Senate ratified unanimously his appointment.
On April 7th 2021 Amb. Felix Corona presented his credentials To H.E. Alexsandar Vucic President of Serbia.
Amb. Felix is member of academic institutions such as the commonwealth Club, World Affairs Council and the Pacific Council on International Affairs.
He is married to Mrs. Eun Hai Kim and has two children, Daniel and Mariana.